Years ago I heard this story via e-mail. Before FaceBook, YouTube, Pinterest & Instagram...
For The Man Who Hated Christmas... from Giving101 on Vimeo.
This true story was originally published in the December 14, 1982 issue of Woman's Day magazine. It was the first place winner out of thousands of entries in the magazine's "My Most Moving Holiday Tradition" contest in which readers were asked to share their favorite holiday tradition and the story behind it.

I sent the e-mail to my pastor and he did a sermon on it. I then nestled a white envelope in the Christmas tree at church & didn't say a word. He found and that led to another message. His hypothesis was that it was the women's group that placed the envelop in the tree, because of the many things listed. It made me smile. He never knew who placed that envelope in the tree.

This is just the beginning of trying to explain where I am going with "Life on Purpose". I want to start with a white envelope story shared by one of my readers. It really touched my heart... 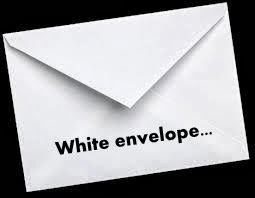 "I thought I would share an experience. I have been in prayer over my New Year's Resolution. God answered last night. I found out that my husband's friend tried to commit suicide. He is an elderly man and a veteran. His wife died around this time 3 years ago. He had to do a home repair in November. He used his food money to do the repair. He had no food and no one to celebrate Christmas with except his dog. The dog was out of food as well. He was too proud to ask for any help. He has taken eggs from my chickens before, some garden produce and some canned goods, but he always feels bad about it. I can tell. He always offers to pay, but I won't take any money. (of course)

We live in a very small area and we found out that the sheriff had done a welfare check, just when he was about to..... ya know. He doesn't know who called or when, neither do we. He says that when he answered the door, the police were so sad. They went and bought him and the dog food out of their own money. He was so embarrassed. I am heart broken. I didn't know and neither did my husband. He wouldn't ask for help. He hadn't talked to my husband in over a week, but we were too busy to notice. I'm so ashamed of that, honestly. I'm a solution person, so let's move on.

When he told the story, my thoughts went to my pantry. It's fully stocked and ready for anything. As a prepper, I have an abundance of resources. I have been shopping in my cabinets this morning for him. I'm not sure how I'm going to pull off my gift, but I'm going to give it and he's going to let me!

So I'm pledging to donate 3 homecooked meals a week to our elderly friend. We are going to check in on him. I'm going to share in my prepping skills and abundance. No one should go hungry in these times. We are in a rural area and elderly services are non existent. It will be the time spent as well that will become a valuable resource. I feel like the food is secondary
I know there are times when you share people's experiences, however in this case, if you decide to share, please leave my name anonymous. If not, I just wanted to share my experience with someone who would understand the way that God works. I do not want any recognition at all. I am actually saddened by my previous actions. I thought that it was a lesson in awareness, community and preparedness."

Posted by Perky Gramma Teaches at 5:48 AM

Email ThisBlogThis!Share to TwitterShare to FacebookShare to Pinterest
Labels: Life on Purpose